Nah famo, I don’t buy it, is Richard Quaz Roodts’ a response to Maggia Gambu’s column There is no African Writing, published as part of the #ReWriteZA series on 1st July 2015.

In your article, There is no African writing, you almost made a valid point but then continued to completely ruin it with vague accusations, finger pointing and absurd selective deductive reasoning. For those who have not read Maggia’s article, it states (and I paraphrase);

Wait. What? Can the congregation say Illogical Syllogism! Excuse me as I laugh, and shoot myself in the face.

I can’t comment on your belief that there is a conscious effort by white owned publishers to control the black perspective. We are gonna have to ask Steve Hofmeyer about that. I do know that any sensible publishing house is driven by economics. And maybe, just maybe, that is just it; economics. And not so much the concerted effort to manipulate our voices and perspectives, as you are alluding to. I’ll leave the conspiracies to Scully and Mulder, because I am freshly intrigued by a new question that rears its ugly head. Are Africans buying books? Does investing in and targeting that specific market make economic sense to the publisher? If we Africans are indeed buying books, then African publishers and authors are missing out on a great economic and ‘Hey everybody, look at me, so selfless, doing it for Africa kumbaya kumbaya’ opportunity. However, blaming the west/white owned/European publisher for the lack or non-existence of African writing only exposes a pathetic, debilitating dependency on white handouts and affirmation. Fuck that. No thanks. If that’s your thing, then go right ahead, I’m good.

But this is not the point I wanted to make.

The more pertinent question to Moi (…get ready this could get boring); What the hell is African writing? What are the evaluation criteria used when leveling your criticism or determining the authenticity of African literature? Is it rooted in subject matter or skin colour or nationality? What exactly does the African story entail? What does this thing look like? Where can I see it? How does it behave? Who are the custodians of this African writing creature?  Tell me. I want to know.

With over a billion (different types of) African people on the continent, 54 countries, thousands of languages, regional dialects, varying cultural and sociopolitical landscapes, physical geography, levels of education, personal views and the authors own mood and issues when creating, where exactly in all of this diverse chaos does the quintessential  piece of African writing surface? How does one define the voice of a billion plus people?

Brace yourself, I have more questions.

What is the history or the sociology of African literature and how is it influencing today’s writer.  Does African writing make room for the reimagined role of the post colonial writer and the impact that the changing social and political landscape has on the nature of the work? Are critics of African writing allowing for African authors to experiment and create beyond the lived experience? Must African writing always be political? Can African writing be absolved of its perceived responsibility to be socially and politically conscious. Is everything we do not already political? (Chinua Achebe must be hating me so hard right now from his armchair in writers heaven) Is Magic realism only for the likes of Gabriel Garcia Marquez and Haruki Marakami? When will we make room for the emotional black male? Or is that too Eurocentric? When will the cultural and socially engineered expectations placed on Female African writers be discarded or is that what keeps them truly African? Are we selling out and bowing to the white owned publishers agenda when we adopt and adapt and become new versions of our old selves? Are we breathing life into the stereotype when we tell the world how disappointed we are in our Africa? Are we lying to the world when we describe a Utopian Africa? Must we constantly affirm our Africanism? Must every book by an African author objectify Africa? For whose benefit? Africa? Are the new individual stories not the building blocks for the new collective story?

Am I asking too many questions? I don’t care. I have more…

Did Nadine Gordimer contribute to African writing? Is Kobus Moolman writing the African story? What about Aryan Kaganof , Wopko Jensma or Andrew Miller? Does their whiteness immediately relegate them to the Eurocentric trough? Ok, let me ask you about Es’kia Mphahlela, Zakes Mda, Lesego Rampolokeng, Mariama Bâ, Steve Biko, Buchi Emecheta, Bessie Head, Peter Abrahams, Ngugi Wa Thiong’o, Matsemela Manaka, Chris Van Wyk, Ayi Kwei Armah, Mafika Gwala, Dambudzo Marechera, Ingoapele Madingoane, Phaswane Mpe, Sello K Duiker. Wole Soyinka or Frantz Fanon? Are they proponents of African writing, or just African writers by default, by virtue of their Blackness? Are their books serving a western agenda? Are they sell-outs? Should I prepare the picthforks and angry mob? Because we must set them on fire along with their books if that is the case. I hope you are starting to see how absurd a statement like There is no African writing really is. 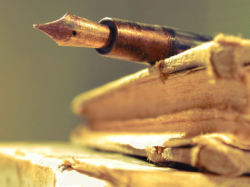 My stance: There is no one singular, African perspective. The collective story is made up of a myriad of individual stories. The individual story is propelled by personal experiences and interactions with space and people. Who the hell gives anyone the right to dictate my experiences to me? Please get over yourself. I do not believe it is fair to box African writers into Chinua Achebe’s (God bless the dead) preconcieved framework of what Africans should and should not write. Any piece of writing is as dynamic, and diverse as the land it spills out of. Trying to define it is like trying to catch the wind with a butterfly net. Or like an armless man trying to hug a hologram. Any attempt at reducing it to a clearly identifiable entity is an exercise in futility. The damn thing keeps shape shifting.

This is boring. For over half a decade some of the most brilliant and kak minds have grappled with trying to pin down the Identity of the African writer.  For whose benefit? To see who is out Africa-ing who? No man. Please. Don’t be that guy.

Poet/EMcee ,writer and social activist Richard Quaz Roodt has, for years, been at the forefront of the Johannesburg poetry scene as a performer, host, workshop facilitator and organizer.
He currently facilitates a Poetry and Creative Writing Class at the University of Johannesburg and has written and directed numerous student plays.

One response to “RICHARD QUAZ ROODT: NAH FAMO, I DON’T BUY IT.”