The project is made possible thanks to the ongoing support of the European Union. The Jacana Literary Foundation is also thrilled to welcome on board the Mail & Guardian this year, who will join in on the sixth Award, as we celebrate the anniversary of Sol Plaatje’s 140th birthday.
Up to three poems in any of South Africa’s official languages can be submitted via the online entry form. Entrants are encouraged to submit poems written in their mother tongue.

The work submitted is judged blind, by a panel of four esteemed poets. As in previous years, a longlist of the best entries received will be published in volume 6 of the anthology. A shortlist of three poets is selected from the longlist, and those finalists will be invited to attend an event at the seventh annual Mail & Guardian Literary Festival in early October, where the winner will be announced and cash prizes awarded.

Named after Solomon Tshekisho Plaatje (1876–1932), the Award recognises the life and vision of this highly respected political and social activist. We always hope that it reveals the political and social attitudes of our time, and reflects the complex, nuanced and uncomfortable truths of life in South Africa, and thus,poems which reflect our current realities are warmly welcomed.

For more information, contact the Jacana Literary Foundation on awards@jacana.co.za. 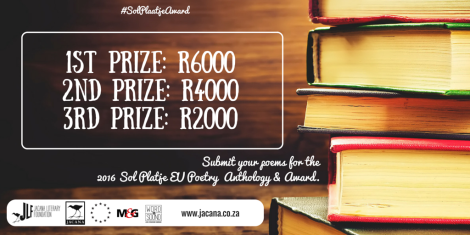 THE 2016 SOL PLAATJE EU POETRY AWARD & ANTHOLOGY
RULES:
• Entries open at 5 pm on Friday, 15 July and close at 8 am on Friday, 29 July.
• Poems in the 11 official languages of South Africa are accepted.
• Poets may enter in more than one language.
• Entrants must be South African citizens residing in South Africa.
• Poems submitted may not have appeared in any publication, online (including blogs and social media) or in print. Only unpublished poetry is accepted.
• Intertextuality and references must be appropriately attributed.
• A maximum of three poems may be entered, although one or two poems per author is also acceptable.
• If you are entering more than one poem, please ensure that they are each saved and uploaded as separate Word documents.
• Poems must not exceed 100 lines.
• Poems must be submitted as a Word document – doc or docx files. No other file formats are accepted.
• Please ensure that the poet’s name does not appear on the Word document. It should only include the title and poem.
• The file name should be the title of the poem.
• Ariel size 11 or Times New Roman size 12 fonts are preferred. No ‘fancy’ fonts, borders or images should be included on the Word document.
• Handwritten entries are not eligible.

Declaration and permissions:
By entering, the poet declares that the entry is their original work and neither whole nor part of their poem has been published previously. They give permission for the publication of their poem in the anthology, without payment, if longlisted. Poets agree to have their work translated into English for adjudication and publication purposes.