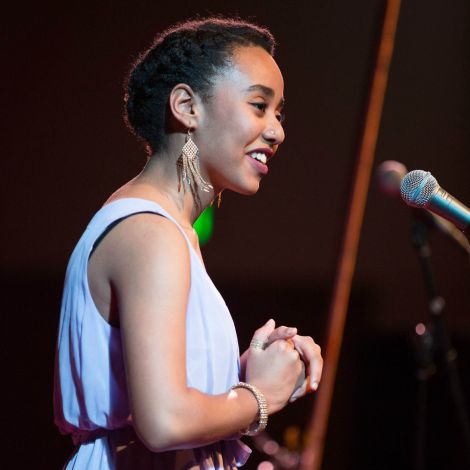 My Name Is Hiwot
I’m tired of people asking me to smooth my name out for them.
They want me to bury it in the English
so that they can understand.
I will not accommodate the word for mouth.
I will not break my name
so your lazy English can sleep its tongue on top.
Fix your lips around it.

No, you can’t give me a stupid nickname to replace this gift of five letters.
Try to pronounce it
before you write me off as
‘Little One’,
‘Afro’,
‘The Ethiopian girl’
or any other poor excuse for a name you baptise me with
in your weakness.

My name is insulted that you won’t speak it.
My name is a jealous god.
I kneel my English down every day
and offer my begging and broken Amharic
to be accepted by this lord from my parents’ country.
This is my religion.
You are tainting it.

Every time you call me something else
you break it and kick it.
You really think that you’re being clever by turning my name into a cackle?
He-what?
He-why?
He-when-how?
He-when-who?
He-get-what?
My name is not a joke

This is more than wind and the clap of a consonant.
My father handed me this heavy burden of five letters
decades before I was born.
With letters,
he tried to snatch his Ethiopia back from the middle of a red terror.
He tried to overthrow a fascist.
He was thrown into prison, ran out of his home.

My name is a frantic attempt to save a country
To preserve a legend
The only line I have leading me to a place
I’ve never been
It’s a boat,
a plane,
a vessel carrying me to an Earth I’ve never felt.
I steep myself closer and closer to Ethiopia
by wrapping myself in this name.
This is my country in ink.

My name is a signature at the end of the last letter before the army comes.
It’s the only music left in the midst of torture and fear.
It’s the air that filled my father’s lungs when he was released from prison.
The inhale that ushers in a new beginning.

My name is a poem
My father wrote it over
and over
and over again.
It’s the lullaby that sends his home-sickness to bed.

I refuse to break myself into dust
For people too weak to carry my name in their mouths
Take two syllables of your time to pronounce this song of mine
It means life.

You shouldn’t treat a breath as carelessly as this .
Cradle my name between your lips
as delicately as it deserves.

About Hiwot Adilow
Hiwot Adilow is a writer from Philadelphia, a First Wave Scholar at the University of Wisconsin-Madison, and an alum of the Philly Youth Poetry Movement. Her poetry has been featured on CNN, NPR, and Wisconsin Public Television.

There was an error retrieving images from Instagram. An attempt will be remade in a few minutes.